The City of London

I made my first investment on Seedrs in February 2019, it was WeGaw a mobile app startup using Satellite data from the European Space Agency, based in Lausanne, Switzerland.

My next investment was the Seedrs EIS 100 fund, to those that follow me on social media, I started referring to it as Seedrs Venture Fund. EIS 100, which stands for Enterprise Investment Scheme, set out to disperse the total investment over a 100 companies fundraising on Seedrs that qualify for the EIS.  The main benefits of EIS is that you can claim back 30% from the investment upon the completion of you self-assessment tax submission.

With more than a year passed since my first investment and with Coronavirus in full swing not just in the UK but the rest of the world, the question I ask how is my Seedrs Venture Fund performing?

The Seedrs investment porftolio dashboard indicates that 100% of all my investments, which currently stand at 92 companies are currently active, none of them have IPO-ed, were sold or acquired, but most importantly did not go bankrupt.

Currently there are three companies fundraising again; which are:

Crua Outdoors based in Tralee, Ireland who did manage to qualify for EIS, even as a foreign company. They specialise in outdoor, camping tents, who have raised £70,005 for 8.8% as early as 2015, with shares priced in at the time at £2.60, but my round came in 2019 August, the value per share was already at £14.51, and with the current fundraiser overfunding by 187%, this means that the initial investors back in 2015 have seen their shares rise over 458%. The company’s valuation has increased from £720,200 to £5.99 million but already nearly 41% in equity has been sold and another 5% up for grabs.

Smarterly is an online service which aims to help people save and invest directly from their payroll, by integrating with employers is also currently fundraising. However, their pitch is not available on Seedrs, they are either preparing their new pitch or fundraising privately or off Seedrs platform. This would be their third fundraiser, the first happened in 2018, £1,625,570 raised for 13.15% equity valued at £10,735,000 with the price per share at £10. While my turn came again with the EIS fund on the second round, which meant an increase in price per share of 23% priced at £12.30, with £2,572,422 raised for another 13.3% in equity valued at £16,723,855, with 762 investors participating.

The reason I have focused on these three companies in such a detail, is because startups go bust most often then failing to raise money to keep going, and they are raising money because most often they are running out of cash to keep going. We could further find out about their financial well being by looking at the company house account submissions, that this blog is only meant to be an update for my overall Seedrs Venture Fund.

What were my top five investments by company? 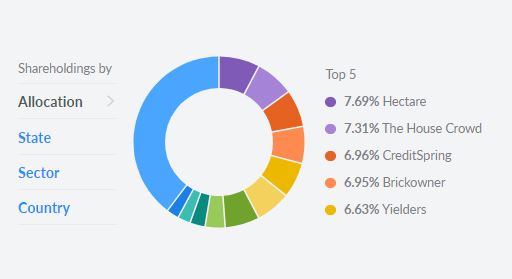 I am not going to disclose how much I have invested in Seedrs, at least for now. Further, I would like to add that I have a strong view and investment philosophy about having a balanced and responsible approach to investing and having a diversified portfolio of companies. However, my top companies are as follows:

It is also interesting to compare the the valuation of Brickowner and The House Crowd and to see which why two such similar online businesses, P2P property investment platforms, are valuing share prices differently, and if there is an arbitrage for the same type of business.

Yielders, a P2P investment platform in property that yields rent payments until the property is sold and investments are returned to investors after a set of years. Raised £669,861 in late 2019, for 6.28% equity in the business from 479 investors, with the total valuation of £10,004,118, share priced at £7.89, which was their first round.

What is my Seedrs Venture Fund allocation according to sectors?

As we can see above from my investments, there is a heavy focus on finance and property, especially combined with technology, or what could be summed as Peer-to-Peer platforms, P2P for short. The main reason is my investment philosophy that the future is decentralized, a bit like Seedrs, venture funding democratised to allow people to invest in property backed loans who might not had ability to do so before the convergence of finance, property and online technology. Therefore, from the following Seedrs shareholding by sector we can see my total investments over 92 companies are spread as follows:

I am not going to list the countries here, as 95.7% investments were in companies based in the UK, this is mostly to do with the EIS100 fund, as it’s much easier for the UK based companies to quality for the Enterprise Investment Scheme, while many European companies who could quality for EIS, further information here, do not know or are not prepared to pay for the UK lawyer feeds and other admin costs.

As mentioned the WeGaw was the Swiss company, Crua Outdoors was the only odd one out to be based in Ireland and qualify for the EIS tax relief, as well not being part of the top five sectors. While the other company based in Spain, was The EU Startups publisher, this was made partially due to my interest in the publishing business, I am an owner of The EU Bubble online magazine. Plus Seedrs founder himself made an investment in the EU Startups, of £10,000, who have raised €73,001 for 5.58% from 81 investors, valued at €1,235,000 with €12.35 price per share. Shame about the startup conference in Barcelona that never happened due to COVID-19.

So how is my Seedrs Venture Fund looking after a year?

Well Seedrs portfolio overview is giving me the following:

IRR (Internal Rate of Return shows the annualised performance of your investments net of any fees (taking into account the impact of any shares bought or sold on the Seedrs Secondary Market as well as any other distributions received). Is currently at 0.08% – therefore not much of a gain after a year.

IRR (tax adjusted –  This is the IRR, as adjusted to take account of S/EIS tax reliefs.) aka this is the 30% return on the Enterprise Investment Scheme qualifying startups, is up by 18% once they are accounted and submitted in the self-assessment tax submission, and that is not difficult to do.

Top
We use cookies to ensure that we give you the best experience on our website. If you continue to use this site we will assume that you are happy with it.Ok